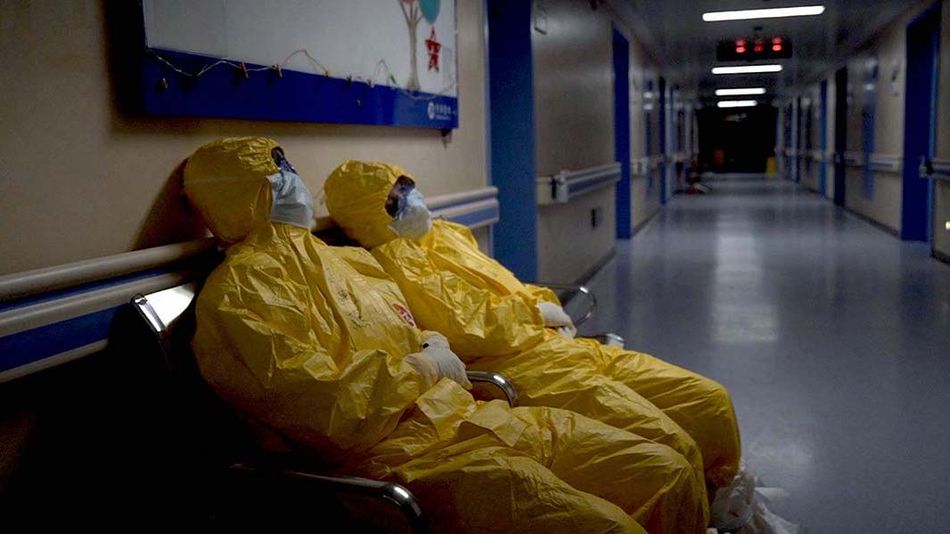 For many, the first mention of COVID-19 was linked to the initial outbreak of the virus in the capital city of Wuhan in the Hubei Province of China. The virus quickly spread leading to a global pandemic but the new documentary 76 Days focuses on the early days of the pandemic. The film opens the doors for audiences to see an unfiltered and brutally honest look at the events which happened inside the COVID-19 hospitals of Wuhan portraying the pain and death of these events openly, not holding anything back.

The mood for 76 Days is set right from the beginning where a hospital worker is held back by their colleagues as they cry out in pain wanting to say goodbye to their father one last time as his body is being taken away from the hospital after he passes from COVID-19. 76 Days is without question the most haunting film of 2020. Where reading about the loss of life and true horrors of the pandemic is haunting enough, seeing it first hand as it is captured throughout the film is near traumatizing at points. It isn't even the passing of individuals that sticks out rather than the complex suffering that comes from it which is new for the pandemic. Where losing a loved one is never easy, not being able to physically see their body one last time and have to say goodbye over the phone is tragic on an entirely new level. Seeing the piles of phones and belongings from those who passed, kept secure ready to be given to their families once the pandemic ends guaranteeing a lack of closure for months would be an idea criticized for pushing too far on the heartstrings if the film wasn't capturing reality. 76 Days is not an easy watch at any point in its 93-minute runtime yet it serves as an important reminder of just how deadly and painful this virus can be even as the world starts to find a period of adjustment and normalcy.

76 Days not only focuses on the suffering of those with the disease but also the healthcare workers. In a subject not talked about nearly as often as it should be, these healthcare workers not only risked their lives working in close proximity with those who had the disease but also were asked far more than they should have been. They were the ones who had to create and maintain order as the society and the world around them crumbled. They had to be the ones not just caring emotionally for the patients without families but also for the families desperate for updates regarding their sick loved ones. More than anything else 76 Days accomplishes, perhaps its most commendable effort is giving a voice to those healthcare workers who had to give everything both physically and emotionally for their patients.

Where the fly on the wall approach to filmmaking is undeniably effective and haunting, it also brings the only true issue to 76 Days which is its pacing. Without a solid narrative or guiding backbone, the film can feel tedious to sit through at times with its nonstop showcase of suffering and pain. Thematically, what the film achieves from very early on is the same thing the film achieves late in the film without any journey or evolution. Whereas always impactful, it feels like there needed to be a deeper hook or justification for the audience to truly engage with the film fully for its entire runtime. This flaw however is admittedly minor and ultimately the worst it costs the film is it achieving the title of being a "masterpiece".

76 Days is an incredibly difficult and painful film that ultimately accomplishes exactly what the film seeks out to achieve. With incredibly brave individuals behind the camera going against the wishes of their own country to expose the true pain and suffering the virus caused their community, the final result is beyond haunting. The film serves as not just a showcase of how bad things can get, but also a reminder to be grateful for one's health and sanity as it is not guaranteed. Even if society wants to pick up right where it left off, the virus has left its toll on the world and the danger is still very much so real, this is a fact 76 Days is not going to let anyone forget.